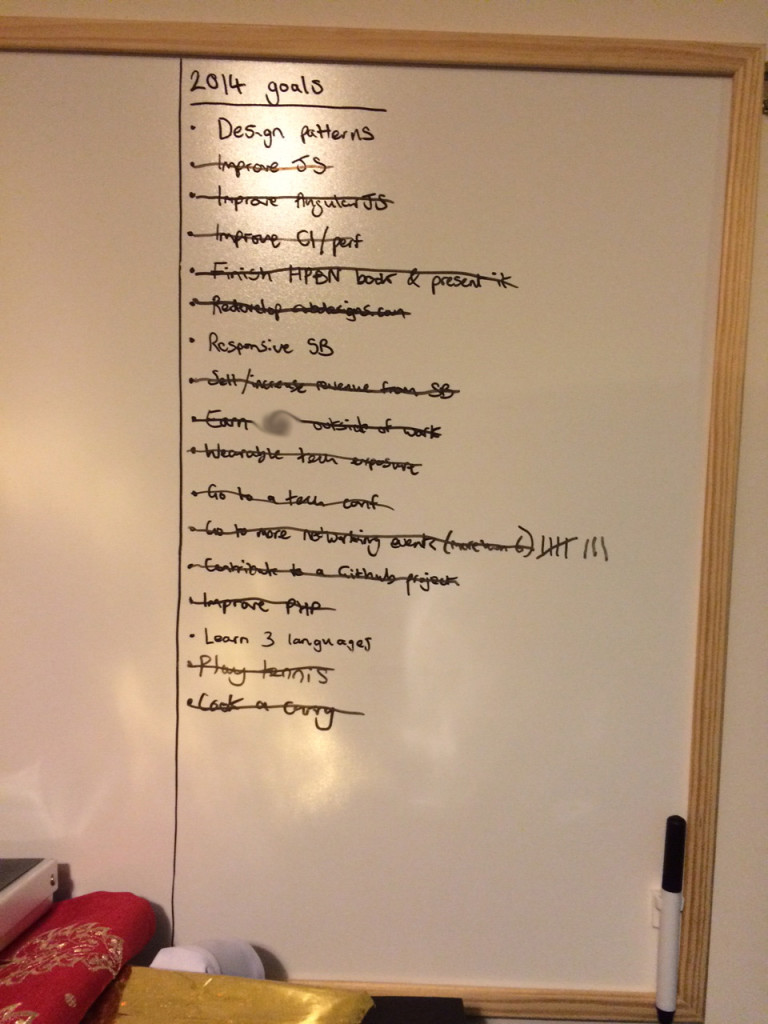 After getting a whiteboard for Christmas 2013, I decided to get into the habit of writing down my goals for the coming calendar year. This post is just to reflect on how that went, but also review some of the other achievements I’ve had in 2014.

It’s important to recognise the wins in your career and life, as it’s so easy for them to get hidden amongst the drama of the daily grind. I’d urge you to do the same, whether it’s on a blog or on a piece of paper.

** Not sure why I banded these together, but definitely improved knowledge in both these areas. Had to mince around with Jenkins a fair bit so I learnt something there. Performance wise - read the odd book and attended a workshop by a smart chap from the Guardian (Patrick Hamann). * **Finish High Performance Browser Networking

** Wow, what a great book. The amount of research that must have gone into this is astounding. Every dev should read this. Ilya Grigorik is a fountain of knowledge. * **Redevelop freelance portfolio/website

** Feeling very tired and out of date. Replaced with a single page using bootstrap and a succinct description of what I do instead. Much better for maintenance and I feel a lot less guilty for it. * **Sell/increase revenue from SalaryBot

** Turned SalaryBot into a SaaS, and got my first lot of paying subscribers. Also lead to another couple of SaaS products being created for the finance industry. Forged some great relationships with business owners and individuals along the way. Looking to expand this and create other revenue channels in 2015. * **Responsive SalaryBot

** Didn’t get round to making SalaryBot responsive, although as paying customers are now the focus, I did work out how to make iframes responsive (dynamic heights being the problem). Hopefully 2015 it will happen. * **Earn £X outside of work

** Ambitious, but was too vague. Instead next year I’m going to concentrate on hitting targets for acquiring customers for my products. * **Wearable tech exposure

** Bought a Pebble smartwatch and ended up prototyping a Karate app. It was very refreshing jumping into something with both feet and not having a clue what you’re doing. Unfamiliar APIs, programming language, hardware. Really enjoyable to create a product that was so entertaining (although clearly a novelty), definitely caused some humour in the office. Probably need to blog on it. * **Go to a tech conference

** I managed to go to two in the end (PHP North East and ng-europe), of which I’m very grateful to my employer, Sky. Having never been to one before, it was an eye opener. Need to go to more of these. * **Go to more than 6 meetups/tech events

** Wanted to beat the previous year’s attendance count - smashed it. Intend to keep this effort up to help stay in touch with the community and my finger on the pulse. * **Contribute to a GitHub project

** Better late than never. Made my first ever open source contribution, to a project I was already using so it made sense. Intend to do more of this in 2015. * **Improve PHP

** Got to grips with Composer and PHPUnit. Also went to a conference. Now I’m back on a PHP project full time I’ll probably want to revisit this goal. * **Learn 3 languages

** Well intended but didn’t happen. Had to play around with C for the smartwatch, but nothing really other than that. Difficult to know what to invest in, as so many are hot, but how many will be relevant in time to come? * **Play tennis

** After a breaking a few bones (amongst other injuries) in my wrist, I made my return to tennis after months of physio. I’m glad to report I’m as rubbish as I’ve ever been! 🙂 * **Cook a curry

** The other half is a great cook, so I wanted to cook a decent meal from scratch for her (I never cook). I managed to do it under supervision. One step at a time!

Outside of my defined goals, it’s been a great year:

I stepped up my dev game in 2014 and read a great deal of material. One thing that’s come out of it is the importance to not let your job take over your life. After reading “Surely you’re joking Mr Feynman!”, I’ve been inspired to do and read things that aren’t necessarily just tech.

They’re written up and ready to go. You’ll see them at the end of 2015 when I’ve had a good stab at them.

What did you achieve in 2014? Have you thought about what you want to do in 2015? Invest in yourself and get thinking!